The Research Capability PDF document summarizes the general capabilities of the UCI Combustion Laboratory. It includes facility details, test stands for both high pressure and atmospheric study and citation to references that provide additional information.

The UCI Combustion Laboratory (www.ucicl.uci.edu) has evolved through 30 years of research ranging from basic science to practical applications. The UCICL is housed in the Engineering Laboratory Facility in the Mechanical and Aerospace Engineering Complex on the main campus. Figure 1 shows a view of the facility looking west. The tall stacks are located immediately above the combustion test cells illustrated in Figure 1b. 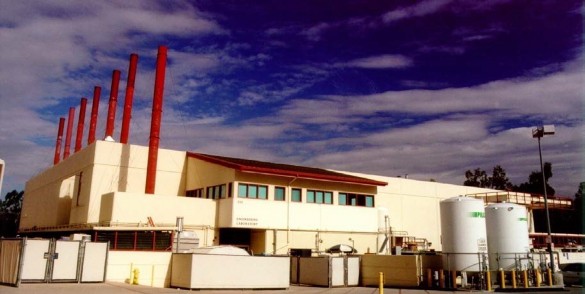 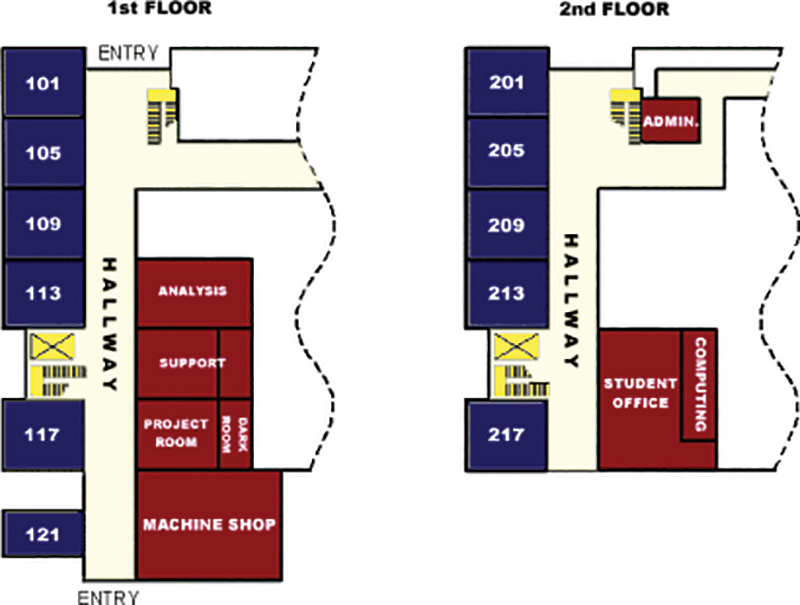 1.1 Elevated Pressure Vessels for General Use

Support from NASA, the U.S. Air Force, UC Irvine, and industry has enabled the UCI Combustion Laboratory (UCICL) to establish the infrastructure and operational experience necessary to explore component and system performance at elevated temperature and pressures. Two pressure vessels are available at the UCICL that feature similar capabilities. The first vessel was originally designed and built over 20 years ago in support of the NASA high speed transport program. The facility has been used for a variety of high pressure spray and combustor experiments and features significant optical access as well as full traversing, allowing detailed in-situ measurements to be obtained (e.g., 1,2.3,4). A second facility with no traversing has also been developed with the purpose of providing long duration reacting experiments for exposure testing and durability evaluations. This facility can also serve as a combustion performance test rig (e.g., emissions and stability assessment, e.g., 5). The two vessels are shown in Figure 2. 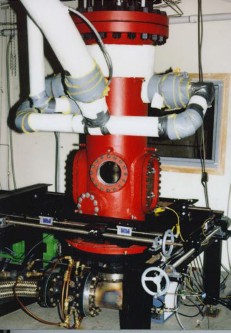 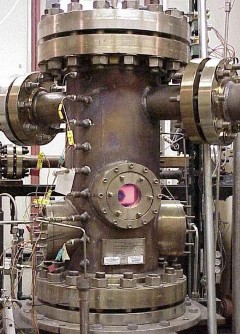 The operation of both vessels is maintained by the facility control system. The control system can route fuel and/or air flows to either vessel. The resources available can provide and control air flow rates up to 1.0 kg/sec (2.2 pounds/sec), pressures of 15 atmospheres, and temperatures up to 649°C (1200°F). The facility can also provide a high-pressure supply of liquid fuel and natural gas. A data acquisition system (LabView, National Instruments) monitors and controls the flow rates and experimental settings and records measurements from thermocouples and emissions analyzers onto a resident computer. These facilities are housed in Test Cells 117 and 217 as shown in Figure 1. These vessels have been used for experimental work that has been reported in numerous papers and publications including footnotes [1-5].

One of the vessels (Figure 2a) is specifically designed to accommodate optical diagnostics. The chamber is traversed while the diagnostics remained fixed about it on optical breadboards. Some details regarding some of the key dimensions and layout of the ports are shown in Figure 3 and Figure 4. 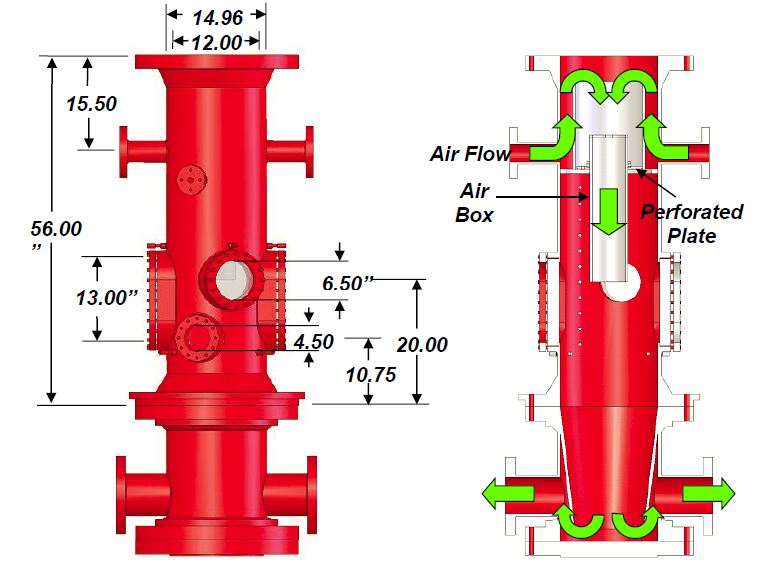 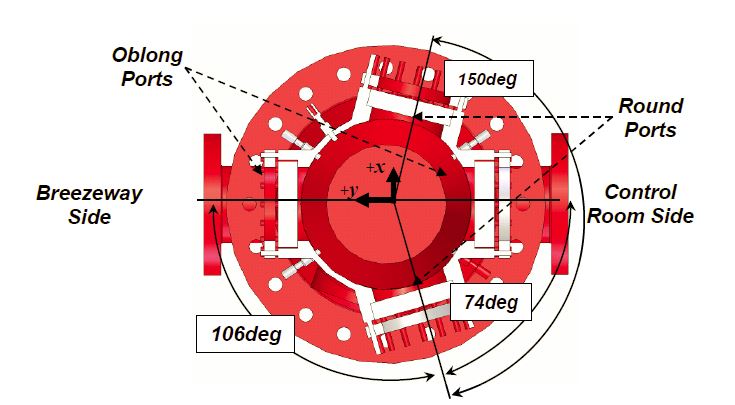 Figure 4. Cross Section of Pressure Vessel at the Optical Height

In addition to the pressure vessels, the UCICL maintains a flow reactor which can be used for studies of autoignition delay. The current flow reactor configuration is shown in Figure 5. This flow reactor has been used to measure ignition delay of alkanes and syngas like fuels and the results have been reported in several publications (e.g., 6,7,8). The flow reactor is setup to allow control of wall temperature. It has also been configured to measure ignition delay either directly (through the use of a IR laser extinction signal produced by the presence of an alkane coupled with an end view fiber optic/photomultiplier tube assemble that senses any chemiluminescence emission). Work has been done with hydrogen containing fuels as well as alkane mixtures.

a) Photo of Flow Reactor 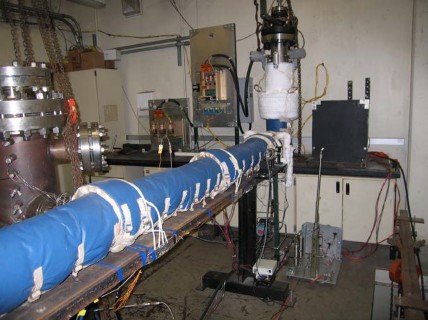 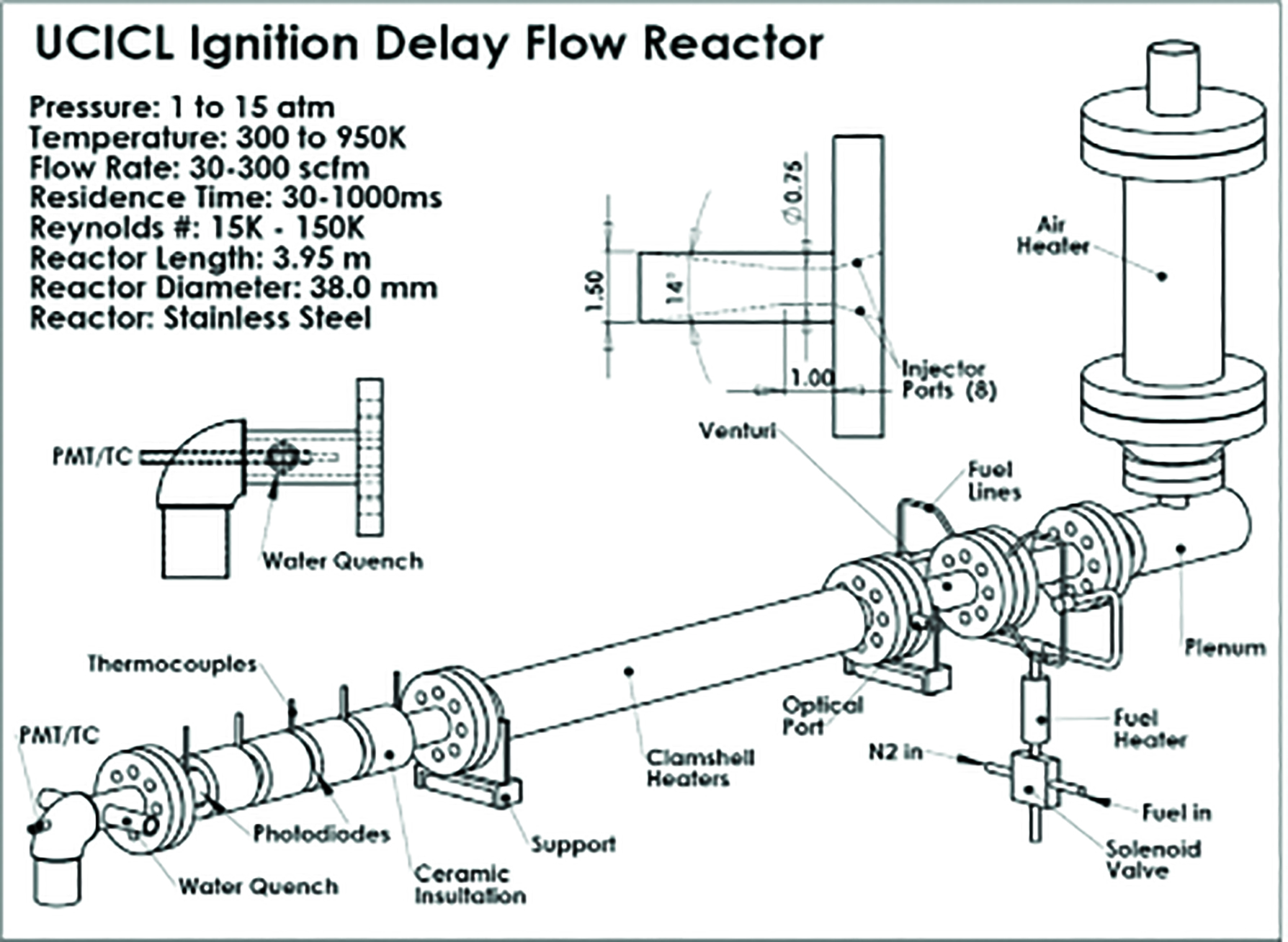 Yet another test rig has been established with the goal of allowing flashback and flameholding studies to be carried out. The setup of this rig is shown in Figure 6. Premixed fuel and air mixtures at elevated temperature and pressures are introduced upstream of the test section as shown in Figure 7. An pilot igniter initiates reaction of the mixture which “bathes” over a test feature. The pilot is turned off and the subsequent flameholding tendencies of the feature is assessed. 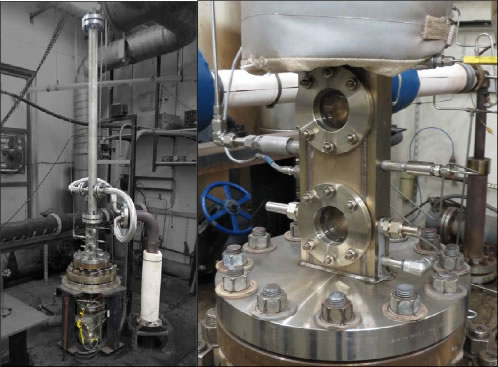 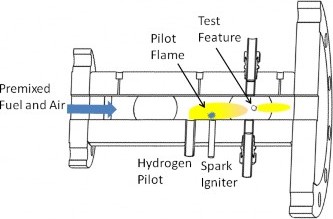 The Fuel Composition Cart was created to accurately meter and blend a variety of gases. The cart, shown pictorially in Figure 8, can blend up to seven different gas streams to create a gas mixture for use by other external systems. This is accomplished through the use of multiple parallel flowing mass flow controllers (MFCs) to monitor and meter the flowrate of each constituent gas. As a result, with suitable calibration and flow matching, the same system can be utilized to simulate HSG fuels in an efficient manner. 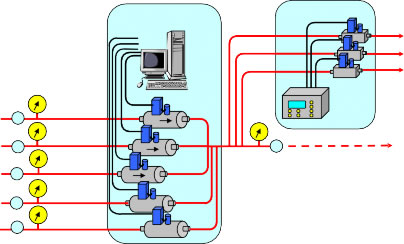 In addition to the two elevated pressure test cells and test rigs, the UCICL maintains 3 atmospheric test cells dedicated to gas turbine research (Test Cells 201, 113, 213 as shown in Figure 1). Each test cell has two test stands to accommodate injector hardware, combustor components, and/or full combustion systems. The stands are all designed to accommodate both conventional and laser diagnostic methods and feature traversing capability to map out parameters of interest such as fuel distribution and velocity. Each stand features flexibly configured flow metering and control as well as instrumentation for monitoring a variety of process variables such as flow rates, pressures, and temperatures. Recent papers presenting results from these stands include [9,10,11,12]. 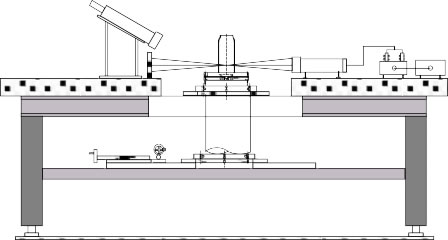 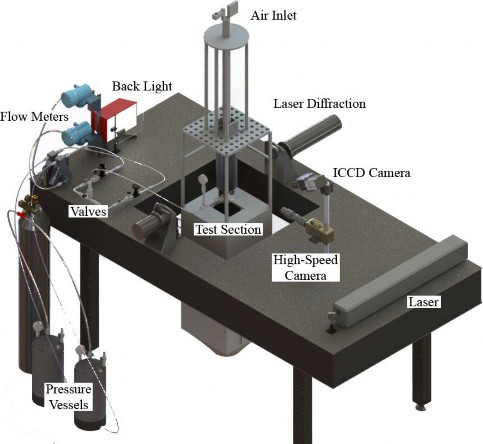 In addition to atmospheric combustion test stands focused on gas turbine combustion, the UCICL maintains a boiler combustion test facility (Test Cell 101 in Figure 1). The boiler combustion facility has water-cooled walls to simulate the unique conditions of steam boilers and features modular burner mounting hardware that allows burners of different dimensions to be installed for evaluation (See Figure 9). This facility is extractive sampling capable and is also optically accessible to allow for imaging and laser diagnostics. Like the majority of the UCICL combustion test stands, the apparatus is capable of traversing to measure features of interest that vary spatially. In addition to air metering capabilities, this facility also has the capability to meter multiple gas fuel streams to use with burners with multiple fuel circuits. Firing rates of up to 5 MBTU/hour can be accommodated. Recent papers presenting results from this facility include [13,14]. 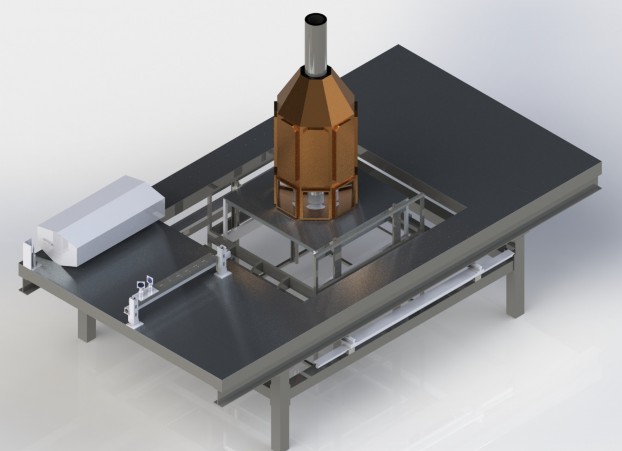 In conjunction with either high pressure or atmospheric facilities, the UCICL has developed significant infrastructure for the study of oil-water emulsions. 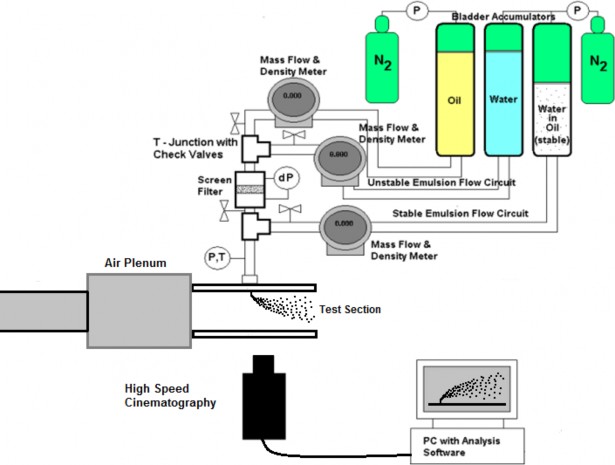 In collaboration with the Material Department, the UCICL has developed an autonomous materials exposure rig under support of the Office of Naval Research and the US Department of Energy. This test rig features the ability to carry out 1000 hour continuous tests with automated cycling and test conditions. The rig is designed to generate Type I and Type II hot corrosion conditions. A rotary block can be outfitted with 27 pins that can be made of various materials and different coatings. The carousel is rotated continuously as it is exposed to the combustion products generated by a small burner. The system is designed to work with small quantities of fuel (e.g, 55 gallons will suffice for a 1000 hour test). In addition, the burner head can introduce contaminants of interest into the combustion zone (e.g, salt or sulfurous compounds) in order to study their effects on the material degradation. The materials department maintains an array of advanced materials analysis equipment that can be used to quantify the behavior of the materials. 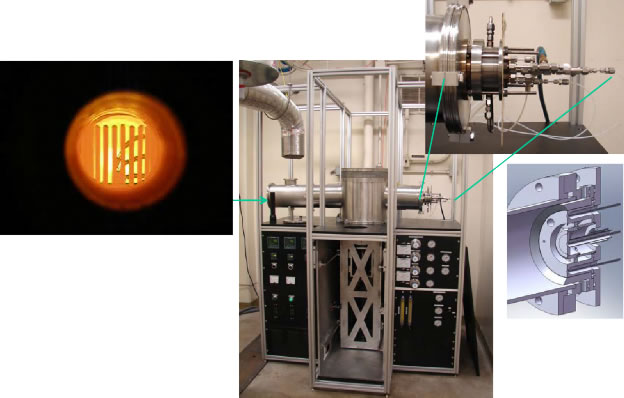 A test bed has been developed at the UCI Combustion Laboratory to study gaseous and particulate emissions from gas fired gas turbines. A photograph of the overall facility is shown in Figure 12. The facility consists of a pair of Capstone 60 kW microturbine generators designed to operate on natural gas. These engines can be ganged together to produce higher volumes of exhaust gas flow (up to 2 lb/sec). The nominal exhaust temperature of these engines is 550 deg F. The facility incorporates external heating to allow the temperature of the exhaust to be varied up to 900 deg F to study the temperature window effect. The engines are fed with fuels generated from an existing fuel blending station. These fuels can be conditioned so as to remove any sulfur present and can also be doped with controlled amounts of mercaptan to allow systematic study. The load of the engines can be varied to induce different combustion stoichiometries for the nominally fully premixed fuel and air mixture. This allows different combustion temperatures to be achieved and therefore studied.

To remove the fuel sulfur from the incoming natural gas, a packed bed reactor was designed and built which used a specially designed sorbent called TDA Research SulfaTrap R6. This sorbent is designed to remove fuel sulfur from natural gas for fuel cell applications. Using this system, total sulfur concentrations in the test gas were lower than the detection limits (>0.1 ppm) of the gas analysis equipment. To introduce mercaptan systematically, a sonic orifice injection system is used to inject controlled amounts of sulfur odorant into the previously scrubbed gas (Figure 13). This allowed for testing numerous fuel sulfur concentrations and numerous sulfur compounds. For this purpose, a sonic orifice injection system was designed and constructed as illustrated in Figure 13. 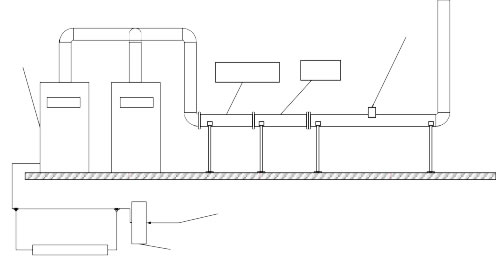 
Once particulate is captured on a quartz fiber filter, a Horiba MEXA-1370PM is used to analyze the filter for organic carbon, elemental carbon, and sulfate. The filter is placed in the MEXA furnace at 980°C in an N2 environment. The particulate captured on the filter is vaporized in the furnace. The vaporized sulfate particulate is de-oxidized due to the heat to SO2. The SO2 is then measured using an NDIR detector. Vaporized solid organic particulate is determined using a CO2 NDIR detector while N2 is flowing. Elemental carbon particulate is determined using the same method with O2 replacing N2. The signals are integrated and a calibration factor is used to determine the original sample mass. The calibration factor is determined using calibration gases containing precisely known concentrations of SO2 and CO2. Using this method, masses as low as 0.2μg can be measured in 4 minutes. This system is specifically designed ultra low particulate mass applications. It has been shown that the collection efficiency on the quartz filters used in this study is comparable to that of Teflon filters. This method shows strong correlation with traditional gravimetric methods.

This test rig has been recently used to generate detailed information regarding effects of fuel sulfur on fine particulate (15, 16).

The UCICL maintains stored gas capability for CO2 (14 tons) and N2 (3000 gal) as illustrated in Figure 1a. These stored gases can be blended into the compressed air stream produced by the air compressors at the facility which can provide up to 4 lb/s of continuous flow at pressures up to 150 psig.

The current maximum flows of CO2 and N2 is 400 lb/hr and 225 lb/hr, respectively. The gases can be mixed in the high capacity mixing station illustrated in Figure 15. This strategy has been used previously to study evaporation of DF2 at 800 deg-K without combustion in the UCICL high pressure facility. In this case N2 was blended with air to drop the availability of O2. The same strategy will be incorporated in the present work with emphasis on use of CO2 to dilute the O2 level. CO2 has also been used to study density ratios with hydrogen injection into air and CO2 under atmospheric conditions. As a result of these experiences, the gas blending system to create arbitrary blends of diluted oxidizer is ready to be used. 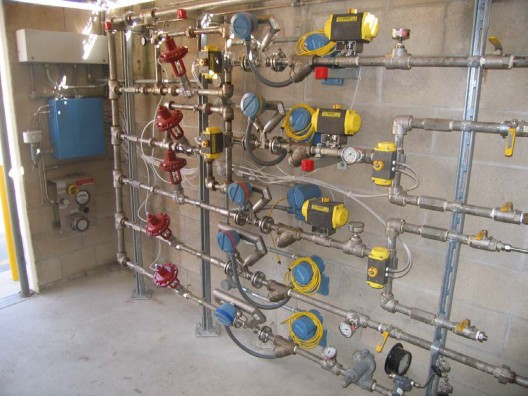 
The overall plan for blending the oxidizer stream is shown in Figure 16. As shown, this approach has been used in a several prior projects and thus experience with the controls and flow limits are well understood.


To provide perspective on the capability of the existing diluents flows, Figure 17 summarizes the flow of pure CO2 required to achieve a given velocity at O2 levels of 10% (vs 20.9% nominal in air) and pressures. As shown in Figure 17, 100 m/s velocities can be achieved up to nearly 20 atm with the current capability using the test hardware shown in Figure 6. In summary, the existing facilities should allow operation to 15 atm without any problems for the hardware planned for use.


Table 1 summarizes the general capabilities available at the UCICL.