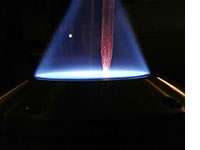 As combustion systems drive towards lower emissions of NOx, CO, and unburned hydrocarbons, advanced technology based on lean premixed strategies are becoming more and more prevalent. This approach allows operation at low combustion temperatures which minimizes conversion of molecular nitrogen in the air into the pollutants classified as oxides of nitrogen. By operating at low combustion temperatures, however, the reaction is less stable thus leading to possible operability issues such as blow off. Another driver in combustion technology is the desire to incorporate additional amounts of renewable fuels such as those derived from biomass, waste streams, or hydrolysis of water into the fuel mix. As a result, opportunities for possible synergies between low emissions and increased renewable fuel content may present themselves.

Using a series of hierarchal experiments, the UCICL is seeking to understand how the incremental addition of hydrogen to natural gas might impact emissions of nitrous oxide (N2O a powerful greenhouse gas) and ammonia (NH3) in addition to oxides of nitrogen. The MEXA-1400QL-NX being utilized uniquely quantifies four nitrogen species (NO, NO2, N2O, and NH3) with fast enough response (10 Hz) that the transient behavior of the exhaust emissions can be quantified.

Thus far, measurements on a laminar flat flame (shown in Figure 1), a low swirl burner, and a surface stabilized burner have shown that, with high levels of hydrogen addition, especially during shut down and startup, the emissions of N2O and NH3 can be significant. Work is underway to quantify the trends and to establish the link between burner type, fuel composition, and operating conditions.